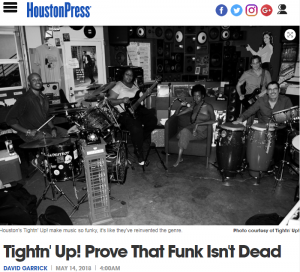 "There's a thing that happens between the music that the band is making and the vocals that never sound like a put on, they never sound safe, and they never sound compromised. There's a magical brew that this band cooks up together, that you can't help but groove to, even if you weren't trying to." - David Garrick 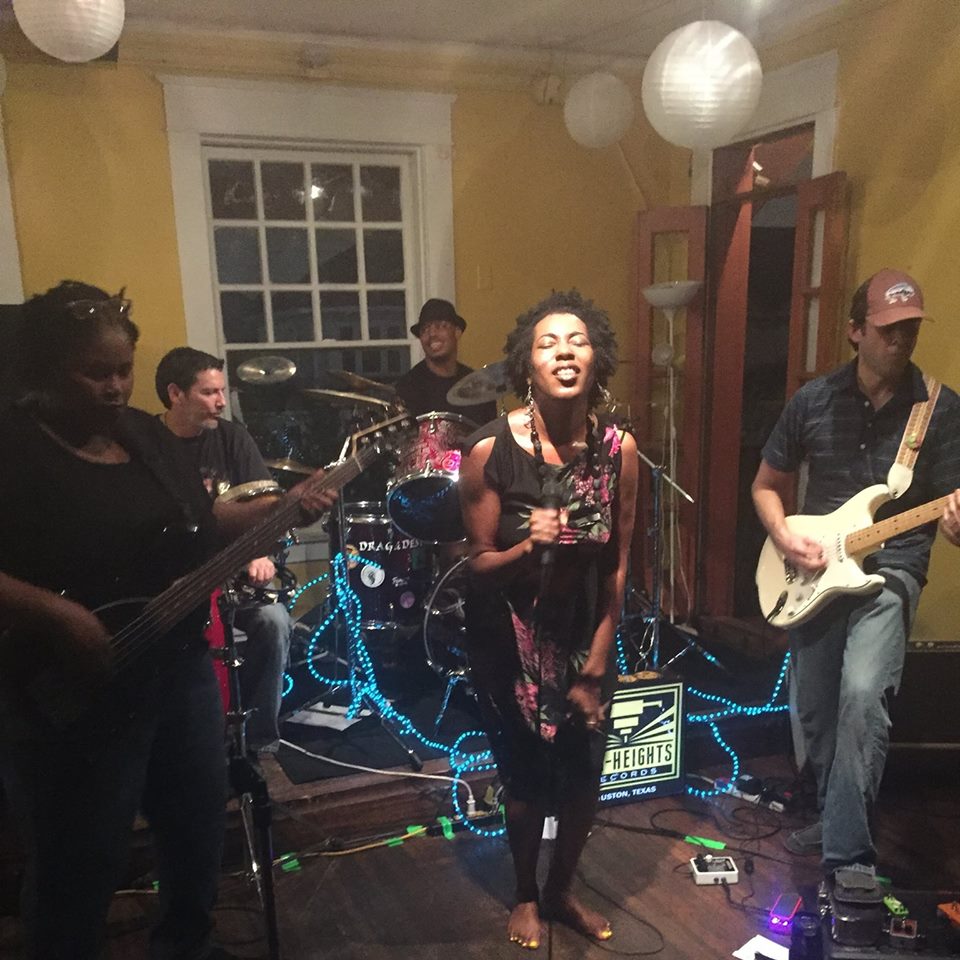 About the band TIGHTN’ UP!

Comprised of studio & seasoned musicians, this the band truly brings the Funk of Houston back from the grave.

Motto: “TUDGAF!”  “What are the ramifications of shaking one’s ass?”

Buzz: “Listening to the band play, it’s obvious as hell that they love what they do and are throwing themselves headlong into it. I dearly love the double-percussion thing, in particular, and the frontwoman is ridiculously talented.” 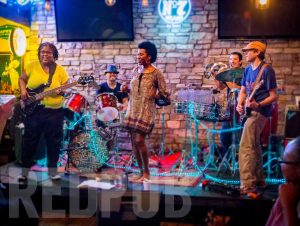 The Tightn’ Up! story begins on Sunday night in the year 2014, in Craig T. Brown’s Heights Vinyl Record Store. Tightn’ Up! was born of his observation of the many funky, stellar, and like-minded musicians in Houston, Texas, most of whom were seemingly unaware of each other. As his Heights shop became an unofficial central hub of casual live collaborations and formal performances, Craig was able to discern a funky sound that was uniquely Houston and begin to assemble and curate players for a myriad of projects. Tightn’ Up! would be named after a once-ubiquitous 1968 Billboard Hot 100 Number #1 hit of yore, written by Houston’s own Archie Bell & The Drells. The name was not chosen to reflect association, but simply as a tip of the hat to the ethos of uniquely Houston soul and funk throughout the decades. That fate-filled night resulted in a roomful of chop-heavy eccentrics from the funkier corners of the scene.

Mayadia, a self-appointed disciple of the Purple One, fronts the group. A clear lifetime veteran of vocal performance and commander of stages, Mayadia has the moves and flies the freaky spirit flag for all to follow.

Bassist Urica Fernandez is an accomplished bassist of over 20 years who has been featured in several bands in the southern United States. An HSPVA alum and student of Professor Conrad Johnson, Urica will say she’s a “just a funk gal” while possessing the chops and thundersoul to slaughter anyone, anywhere.

Master percussionist Louis Bolderghini is a lifelong student and professor of the craft with a legendary resume spanning a history of Houston jazz, including vibraphonist Joe Jackson. (Even though he’s from Baaah-ston!) Lou is proud to be an innovative percussion artist, and Drum and Bugle Core World Champion.

Drummer Mikol Hatter, of Houma, Louisiana, has been ripping it as a consummate pro for decades on tour, as well as with Houston’s finest. In addition to those thunderous chops, Doctor Hatter is an accomplished entertainer, with a nomination for Best Drummer from the Houston Press Music Awards. This rhythmic combo of Lou and Hatter possesses untold magic that comes alive and grows legs bigger than itself, every performance.

Veteran thoroughbred funkateer, Brandon Miles, holds down the guitars and the occasional organ, monotron, and lasers. Miles has been known at the drop of a funky hat to play a great many of these musical notorieties in the same night.

One never knows what might happen at a Tightn ‘Up! show. Historic Houston staple, Last Concert Café says, “[Tightn’ Up!] brand of music is technical and progressive, and it has all the elements you need for a booty-bouncing funk show. But it also has an element that few other bands can achieve, a smooth, sensual feel guaranteed to get you moving.”

Their debut album, “And Now We Can Begin” (named for an inside joke stemming from an infamous rehearsal) is a representation of forwarding movement and soldiering on as the resilient funky children and torchbearers of Houston soul.

CD drink up light up music tees
Get Support